Home>The Odds are Good, but the Goods are Odd 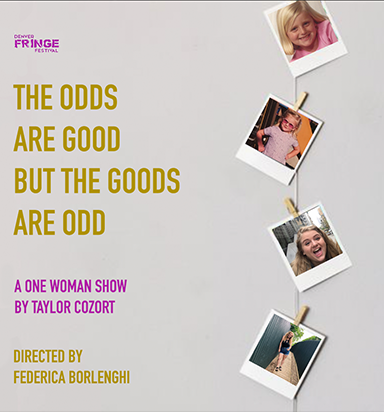 The Odds are Good, but the Goods are Odd

After meeting a young woman at her first post-operation appointment, she guides us through biographical snapshots from her bariatric journey. This dark comedy vulnerably portrays her experience and offers an honest perspective on some of the darkest as well as the most hilarious events and meals that shaped her into who she is today. World premiere.

Note: This performance is a streaming video as part of the 2020 online-only Denver Fringe Festival.

Federica Borlenghi (Director/Producer) is an Italian Writer, Director and Creative Producer based in Brooklyn. She is the Founder and Co-Artistic Director of HERE WE GO, Site-Specific Production Company. Federica is also Italytime Cultural Center’s Production Consultant and a Rising Sun Performance Company Ensemble Member.
Her work has been featured at IATI Theatre, Lincoln Center Library, Governors Island, The Tank, Alchemical Theatre Lab and more.

Taylor Cozort (Writer/Actor/Producer) is a New York based artist and recent New School for Drama Graduate. Taylor is honored to be a part of the inaugural Denver Fringe Festival. She is grateful for the opportunity to share such an important story and endlessly grateful to share it with her amazing team. Some recent credits include Electable, No Man’s Land Theatre Company’s production of Othello, and The King Stag.

Alexa Roosevelt (PR) is a New York based performance artist and graduate of SUNY Purchase’s BFA Acting Conservatory Program. Upon graduation she signed with Henderson Hogan Agency for Theatre, TV, Film, & Musical Theater. She currently works full time as a Creative Consultant and Talent Manager for Astarte Creative Entertainment Agency & Dances of Vice. She is thrilled to play a small role in bringing one of her best friends creations to life and hopes you are as moved as she is by Taylor & Fede’s memorable and gripping storytelling.

Create your own review
Denver Fringe
Average rating:   1 reviews
Emma Ecklund
by Emma Ecklund
The Odds are Good and so is the show

Taylor is a captivating performer for so many reasons, and in this play, her commitment to telling her truth was both heartbreaking and endearing. The Odds are Good But the Goods are Odd doesn't tiptoe around its central topics that are so frequently glazed over, but instead runs through them at full speed and with conviction, sharing earnestly with the audience the cuts and bruises gathered along the way. Sincere, full of heart, and remarkably funny - this show is not to be missed!