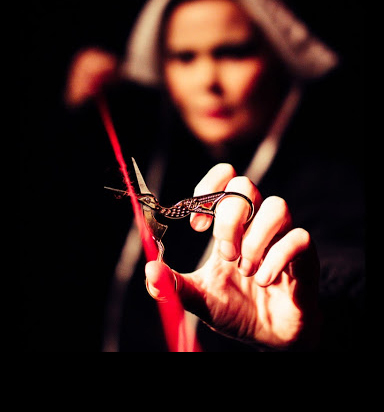 Note: This performance is a streaming video as part of the 2020 online-only Denver Fringe Festival.

Elizabeth McAnulty Quilter is a Masters graduate of the Royal Academy of Dramatic Art in London, England. A classically trained actor and clown, she has spent the last three years in Chicago performing, writing, and devising her own work. Most recently, Elizabeth wrote and performed in The First Fox, and played Robin Starveling in Backroom Shakespeare Project’s Midsummer Night’s Dream. She is an SAFD certified actor combatant, and a trained singer and dancer. Past roles include: Hamlet; Hamlet (Quicksilver Shakespeare Company), Dromio of Ephesus/Syracuse; Comedy of Errors (Hampshire Shakespeare) Queen Elizabeth, Richard III (Backroom Shakespeare Project). Hopefully, after the plague is over, you will see her performing as Mercutio for The Accidental Shakespeare Company.

Samie Jo Johnson is a multi-hyphenate artist originally from Colorado now based in Chicago. She is an ensemble member with Quicksilver Shakespeare Company where she runs the blog and has learned every role in Hamlet. Prior to sheltering in place, she hosted a monthly Queird Art Party and was a regular at Grandma’s House poetry show. In social isolation, she’s performing as Sam in Match/Stick over Instagram live. Samie Jo has a BFA in Theatre Performance from the University of Evansville in Southern Indiana and is a proud alum of the Denver School of the Arts.

Carly Belle Cason is a physical actor, dancer, fighter, and movement designer with roots deep in the Heart of Texas. A lifelong dancer, classically trained actor, and Advanced Actor Combatant for the SAFD, Cason brings a rough and tumble grace to her performances and fights. After two years of fighting and stunt work across the country, Cason landed in Chicago, and has spent the last two years performing Shakespeare, designing violence, and studying intimacy with Theatrical Intimacy Education and Intimacy Directors International (*see Intimacy Directors and Coordinators)